Home All Courses The EU itself EU POLITICAL SYSTEM Units Unit 2. The inter-institutional relations: how institutions and subsystems interact.

EU POLITICAL SYSTEMUnitsUnit 2. The inter-institutional relations: how institutions and subsystems interact.STEP 3. Which elements of the Parliamentary/fused powers model can be found in the EU?

STEP 3. Which elements of the Parliamentary/fused powers model can be found in the EU?

However, the EU is not a ‘pure’ model of ‘separated powers’.  Rather, it also retains some characteristics which are typical of ‘parliamentary systems’, where powers are fused and where the legislative and the executive are mutually dependent in terms of selection and removal. Let us consider the relationship between legislative powers and the European Commission as ‘executive’. Look at the picture below from left to right. Do the European Parliament and the Council of Ministers play a role in the selection or removal of the European Commission? 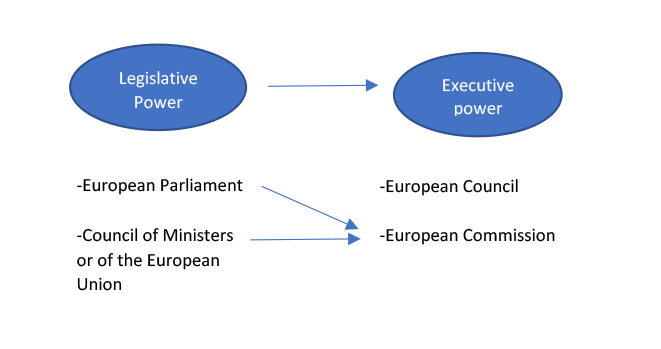 In this case, the answer is more complicated than what we have seen in the previous step.  While the Council of Ministers does not play a role in the nomination of the European Commission and in its potential removal, the European Parliament does.

Generally, in proposing a candidate, the European Council should take into account the results of European elections. As said by art. 17.7 of the Lisbon Treaty:

To have a better understanding of the spitzenkandidat mechanism, give a look at this video.